In August 1909,  Mr. Edwin A. Grozier, Publisher of the Boston Post, a newspaper, forwarded to the Board of Selectmen in 700 towns* (no cities included) in New England a gold-headed ebony cane with the request that it be presented with the compliments of the Boston Post to the oldest male citizen of the town, to be used by him as long as he lives (or moves from the town), and at his death handed down to the next oldest citizen of the town.  The cane would belong to the town and not the man who received it.

The canes were all made by J.F. Fradley and Co., a New York manufacturer, from ebony shipped in seven-foot lengths from the Congo in Africa.  They were cut to cane lengths, seasoned for six months, turned on lathes to the right thickness, coated and polished.  They had a 14-carat gold head two inches long, decorated by hand, and a ferruled tip.  The head was engraved with the inscription, — Presented by the Boston Post to the oldest citizen of (name of town)  — “To Be Transmitted”. The Board of Selectmen were to be the trustees of the cane and keep it always in the the hands of the oldest citizen.  Apparently no Connecticut towns were included, and only two towns in Vermont are known to have canes.

In 1924, Mr. Grozier died, and the Boston Post was taken over by his son, Richard, who failed to continue his father’s success and eventually died in a mental hospital.  At one time the Boston Post was considered the nation’s leading standard-sized newspaper in circulation.  Competition from other newspapers, radio and television contributed to the Post’s decline and it went out of business in 1957.

The custom of the Boston Post Cane took hold in those towns lucky enough to have canes. As years went by some of the canes were lost, stolen, taken out of town and not returned to the Selectmen or destroyed by accident.

In 1930, after considerable controversy, eligibility for the cane was opened to women as well.

Pursuant to an article passed at the Annual Town Meeting on March 4, 1968, the Board of Selectmen organized the Maynard Centennial Committee with William Bennett, becoming chairman; Birger Koski, assistant chairman; Virginia Murphy, secretary; Ralph Sheridan, treasurer; Elizabeth Schnair, historian; and Joseph Boothroyd, alternate.  The duties of this committee are to “organize, plan and put into execution the 1971 Centennial Celebration of the Town of Maynard”.

The Centennial Belles and the Brothers of the Brush were organized as the Participation Division; a Review Division and a Publicity Division set up; the Centennial Jazz Band “Boiler Room Boys” organized and played at the first affair, a dance sponsored by the “Belles” on February 14, 1970; an Ethnic Cookbook Committee, sponsored by The Maynard Women’s Club; and the following other committees set up: Parade, Ball, International Day, Revival of the Annual 1929-1947 Six Mile Race, sponsored by the Knights of Kaleva; a revival of the 1929 Gilbert and Sullivan operetta; the Centennial Medals made and being sold; a country store set up; Youth Day; Industry Day; a fireworks contract signed. The committee also came up with the idea of trying to locate the Boston Post Cane and renew Mr. Grozier’s original intent and purpose for the cane.

The tradition had been carried on in Maynard for several years and disappeared. To add to the mystery no one could recall who had received the cane last.  The Committee hoped that the symbolic tradition could be reinstated not only for the honor given to the recipient but also for its historic origin.  Immediately a search was started to find the Boston Post Cane that had been missing for at least 43 years.  Notices in the local newspapers asked everyone to search their attics, cellars, garages, barns, sheds, etc. to see if the cane could be brought to light.

As Curator of the Maynard Historical Society, Ralph Sheridan searched through the back copies of the old Maynard News and the Maynard Enterprise at the Historical Society rooms in the Town Building and found the information about the historical start of the Boston Post Cane, and also located information about each of the holders of the cane from its inception in 1909.  He found that the Maynard cane was held in succession by the seven oldest citizens, as follows:

From October 19, 1928 the cane dropped from sight and was evidently completely forgotten until the time of the Centennial celebration of the Town of Maynard in 1971, … 53 years!

Despite the diligent effort of the Centennial Committee and the townspeople it was not located in time for the Centennial Celebration; but a persistent search continued. Even the “Yankee Magazine” got into the act and Tim Clarke, executive editor of the magazine, came to Maynard to get some information and included it in a story he had in the March 1983 issue.

On September 17, 1981 the mystery was finally solved and the Boston Post Cane came to light.  It was found stashed away in the closet of Raymond Sheridan, Sr.  He had just recently died and his children found it when removing his possessions from the bedroom closet. It was later explained that in 1962 when the original “Town Building”, the old Middlesex and Assabet Boarding House, was being torn down the cane at that time was in the office of the Maynard Public Health Nurse and she gave it to Raymond for safe keeping. Raymond was in charge of the Public Works Department. Evidently the cane had been given to her by the family of Daniel Coughlin, and as she was not a native of Maynard and did not know the historical significance of the cane just put it in the closet of the Public Health Office where it remained until the place was being vacated before moving into the new town building.

At last, the mystery was solved and the search ended.  In order to avoid a repetition of the cane dropping from sight and out of mind the Board of Selectmen, Mark Waldron, Samuel Wade, and Robert Gilligan “officially retired the Boston Post Cane to the custody of the Maynard Historical Society, Ralph Sheridan, President, and Birger Koski, vice president, accepting it.”  You may rest assured it is in a safe and secure place.

The Boston Post Cane was retired because the Maynard Board of Selectmen and the Maynard Historical Society did not want to lose it again, and they followed the example of many towns.  When the custom began in 1909 the population of the town was stable, and there were many families in town going back for generations, and they seldom moved.   But today many families coming into town are moving out in a short time.  The population is constantly changing, mostly on account of work situations; and many are not here long enough to become interested in town affairs.  The cane could be given to a person in one of these families, who might be moving from town soon and the cane could be lost forever. 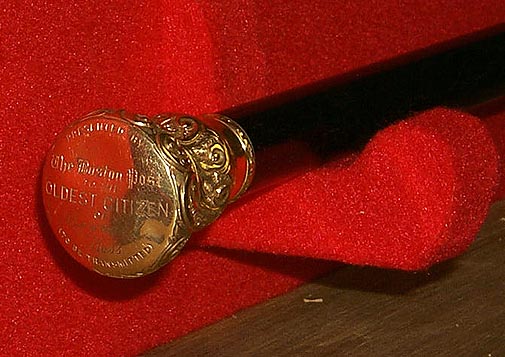 In 1999 the Maynard Historical Society decided to revive the tradition of honoring “Maynard’s Oldest Citizen” by presenting him or her with a symbolic version of the cane in the form of a plaque issued by the Maynard Board of Selectmen.  And so we continue the honor roll which was started at the beginning of the 20th century:

All of the original research for the first section of this page was done by Ralph L. Sheridan, who was Maynard’s Official Town Historian from 1984 to his passing in 1996.  It has since been edited and updated by Dave Griffin.

Errata: For a number of years we reported the number of canes as 431 – certainly an unusual number. This was the number from Ralph’s 1985 article that the original web page and most of the above was based on. Barbara Staples has done extensive research on the cane and has determined that the number of canes dispersed was 700. Where 431 came from is a bit of a mystery and we’re a bit embarassed to have perpetuated this error. Barbara’s surveys positively identified well over 600 towns that received the cane, and we’ve been over 431 for many years now, so the 431 number is not even close.   Having corrected this mistake many years ago we are bemused to see this number pop up from time to time in various newspaper accounts.