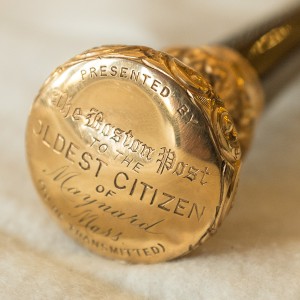 On August 2, 1909,  Mr. Edwin A. Grozier, Publisher of the Boston Post, a newspaper, forwarded to the Board of Selectmen in 700 towns* (no cities included) in New England a gold-headed ebony cane with the request that it be presented with the compliments of the Boston Post to the oldest male citizen of the town, to be used by him as long as he lives (or moves from the town), and at his death handed down to the next oldest citizen of the town.  The cane would belong to the town and not the man who received it.

The canes were all made by J.F. Fradley and Co., a New York manufacturer, from ebony shipped in seven-foot lengths from the Congo in Africa.  They were cut to cane lengths, seasoned for six months, turned on lathes to the right thickness, coated and polished.  They had a 14-carat gold head two inches long, decorated by hand, and a ferruled tip.  The head was engraved with the inscription, — Presented by the Boston Post to the oldest citizen of (name of town)  — “To Be Transmitted”. The Board of Selectmen were to be the trustees of the cane and keep it always in the the hands of the oldest citizen.  Apparently no Connecticut or Vermont towns were included (at one point it was thought that two towns in Vermont had canes, but this turned out to be a bit of a myth).

In 1924, Mr. Grozier died, and the Boston Post was taken over by his son, Richard, who failed to continue his father’s success and eventually died in a mental hospital.  At one time the Boston Post was considered the nation’s leading standard-sized newspaper in circulation.  Competition from other newspapers, radio and television contributed to the Post’s decline and it went out of business in 1957.

The custom of the Boston Post Cane took hold in those towns lucky enough to have canes. As years went by some of the canes were lost, stolen, taken out of town and not returned to the Selectmen or destroyed by accident.

In 1930, after considerable controversy, eligibility for the cane was opened to women as well.

Errata: For a number of years we reported the number of canes as 431 – certainly an unusual number. This was the number from Ralph’s 1985 article that the original web page and most of the above was based on. Barbara Staples has done extensive research on the cane and has determined that the number of canes dispersed was 700. Where 431 came from is a bit of a mystery and we’re a bit embarassed to have perpetuated this error. Barbara’s surveys positively identified well over 600 towns that received the cane, and we’re past 460 canes identified, so the 431 number is not even close.   Having corrected this mistake many years ago we are bemused to see this number pop up from time to time in various newspaper accounts.